My research focused on the physiology and ecology of marine and anadromous fishes of California. This is not a complete list, but gives an overview of some of the stuff I’ve done. (I’ve left out studies I worked on while employed at California Department of Fish and Game and U.S. Forest Service.)

My first research project was conducted as an undergraduate out of UC Davis’ Bodega Marine Laboratory in a summer course, “Techniques in Fish Biology”. I compared the dietary composition of leopard sharks from two locations in nearby Tomales Bay.

Normally, when these kind of studies are done, researchers sacrifice (euthanize) the shark and then slit open the stomach to see what’s inside. Mine used a non-lethal technique that relied on a unique anatomical feature of sharks — their stomachs are not held to the body wall the same way ours is. This allowed me to use long tongs to reach down the shark’s pharynx, pinch onto the stomach lining and pull it through their mouth to collect all the stuff they’d been eating.

You might be thinking, “Doesn’t that hurt the shark?!”

Actually, sharks will sometimes evert their stomachs all on their own. And even their intestine! They do this to scrape off parasites that might have attached to the stomach or intestinal walls. My sharks were lightly anesthetized before having their stomachs (and food) pulled out, and revived in fresh water before being set free.

So, what did I find? Not too surprisingly, leopard sharks caught from one sandy area of the bay were largely feeding on a burrowing critter called the innkeeper worm, and in another rocky area, not too far away, were feeding mostly on crabs.

The study was published in the journal, California Fish and Game (Nondestructive diet analysis of the leopard shark from 2 sites in Tomales Bay, California. Jason D. Webber and Joseph J. Cech, Jr. 84(1). Winter 1998.)

For my master’s degree, I conducted research on leopard sharks in Humboldt Bay, CA. This time, it was three-pronged approach: diet analysis, parasites, and reproductive aspects of female sharks (size of maturity, and number of offspring if a female was pregnant). I teamed-up with a local commercial fisherman who took the meat from the sharks and then gave me everything else — head and all the internal organs. (My boyfriend at the time just loved how I smelled after coming home from a long day at the lab.)

Unfortunately, I can’t find many of the photos from that project, but the results (except for the diet analysis) were pretty interesting. At least for a nerdy fish biologist.

Turned out that sharks caught by hook and line tend to have bait in their stomachs (duh!). The diet analysis was kind of a scrapped project.

In the grueling process of collecting the many, many types of parasites that live inside (and outside) the sharks, there was one I found that attached itself to the shark’s gills that had never been formally described — basically, a new species.

Of the more unexpected findings was that female leopard sharks from Humboldt Bay (which is way up in the northern part of California) matured at a larger size (and, certainly, a later age) and that they tended to have fewer pups at a given size compared to sharks in San Francisco or Monterrey bays, a few hundred miles south. This concept is not unheard of, that differences in latitude has an effect on growth rate, age-at-maturity, or even fecundity in animals, but it had never been documented in sharks within such a narrow geographical range.

Between my master’s degree and before starting my Ph.D program, I worked with a former professor at UC Davis (Joe Cech), studying the swimming abilities of white sturgeon. This is a great big fish (reaching lengths of 20 feet!!) that, like salmon, migrate up from the ocean to freshwater to breed. Unlike salmon, they’re not able to jump up and over the special “ladders” that were built on dams to allow salmon to keep on swimming upstream.

This was a fun project that included full days of fishing for sturgeon, transporting them back to Davis, and testing their swimming abilities in a specially-built indoor, variable-speed “treadmill” (made of 4 dump-truck beds bolted together, end-to-end) to simulate conditions of rivers that the sturgeon were trying to swim up.

The study was presented at two professional meetings and published in Transactions of the American Fisheries Society ( Webber, J.D., et al. 2007. Upstream swimming performance of adult White sturgeon: effects of partial barriers and a ramp. 136(2):402-408.)

After focusing most of my research on very large fish, my doctoral work took a big shift, looking now at very tiny larval fish. So small that you could easily fit several on the tip of your finger!

A Ph.D. dissertation typically gets into the more arcane, or “way out there” theories of science. Mine focused on an ecological concept called “Bigger is Better”, meaning that if you’re small, then you’re vulnerable (to predators), so it makes sense to get BIG as soon as possible. And if that’s true, then it should be the case that evolution would select for very fast growth during vulnerable stages, like being a larval fish.

Turns out, not so much. Turns out, that there are what are called “trade-offs” with fast growth. And, in fish, those trade-offs are in the ability to swim fast. So, fast growth came with a cost!

I collected wild baby fish from Catalina Island and worked with fish hatcheries at the Hubbs-Sea World Research Institute to measure those costs by testing their swimming abilities, and then relating it back to their growth rates. This was done by looking at “natural” growth rates from the wild fish (using their otoliths, shown below, which record their growth rates like tree rings do), and also by “forcing” faster/slower growth rates by changing the water temperature of fish grown in the lab (the lower two pictures show the tanks I built to grow larval fish, and two of my “research subjects” on the tip of my finger). 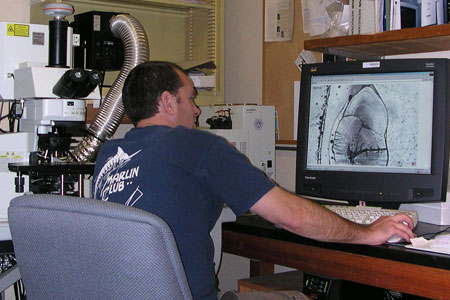 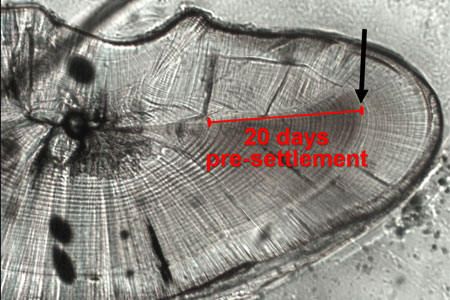 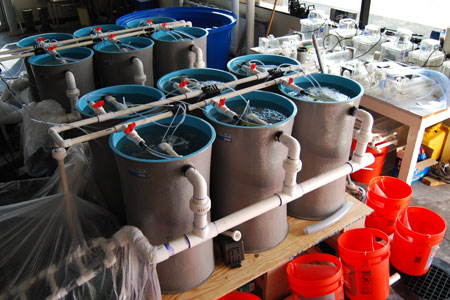 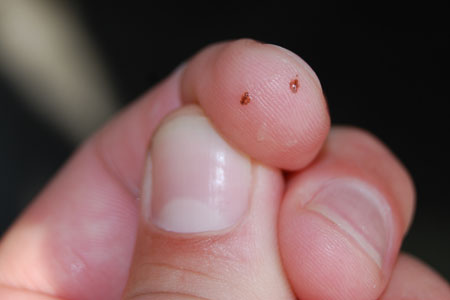 The video below shows a standard swimming test used by fish biologists called the U-crit, or the critical swimming velocity. It’s along the same lines, for humans, as how fast you could run a mile — a measure of aerobic ability.

The results of almost nine years of research are pretty complicated, to say the least, so I won’t try to sum them up here. Sadly, none of my doctoral research has been published since it is (supposedly) still being edited by my graduate advisor. If you’re interested, my exit seminar presentation can be viewed here.